Enlightened keto cheesecakes are now in stores! Featuring many flavors with the classic original cheesecake, strawberry, chocolate, caramel chocolate and a seasonal pumpkin. All low carb and keto friendly with great ingredients.

Where To Find Enlightened Keto Cheesecakes

Currently they are only in Publix. I was lucky enough to find 2 flavors. If you go online and put in the name it’ll show a Publix near you that has them. Hopefully it’s in your city!

Now, they are now on Enlightened’s website and you can order directly there. Have them shipped to you in a matter of days. They even offer bundles.

How Many Net Carbs

Each Cheesecake varies in total net carbs. The original and strawberry come out to only 2g net carbs a piece. They use allulose and monk fruit to sweeten them so no added sugar. The ice cream was sweetened with soluble corn fiber which was highly controversial. Some people commented that it spiked their blood sugar readings. These were mainly diabetics so if you are I’d check it. I personally did a test and had no response, which was great!

How Many Flavor Do They Have 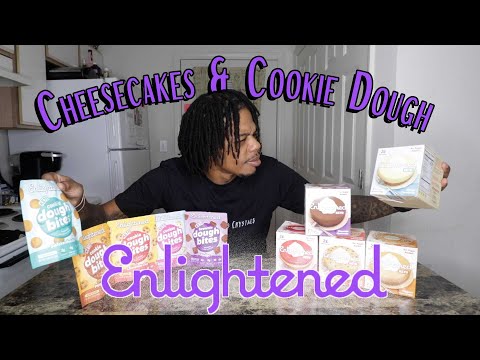 I thought this was easily the best out of the two. They didn’t load up on the strawberries which was fine. Yet, it came through good enough. The crust didn’t have a weird flavor such as the original one.

I enjoyed this cheesecake but not as much as the strawberry. Small chocolate chips on top of a caramel flavored cheesecake. The crust was far better out of the ones I’ve tasted with it being chocolate.

Coming in at number 3 but honestly it’s 2.5. I can’t really decide which taste better between this one and the caramel chocolate flavor. I love the chocolate crust in these flavor they just stand out to me!

The original was very lack luster. I was saddened because I expected more. It was the one I went for first. I noticed they were sweet without being too sweet which was great. But the crust is made of almonds and that really threw me off. Would I buy it again? I don’t think so.

I love pumpkin spice anything. But, I don’t care for this one. They have done wonderful with pumpkin in their past ice creams, so I was excited. Yet, ended up disappointed. The pumpkin flavor seemed off to me and I am not too sure why. I didn’t get the traditional spice that comes with pumpkin.

Other Enlightened Reviews You Missed

I have tried the original and strawberry so far. I will go through each and write a statement for each. They are just releasing and moving a little slow. While you’re waiting check out my other Enlightened reviews.