Almond flour waffles are a healthy replacement that is gluten free, keto and paleo friendly. Fluffy and easy to make these waffles have a buttery flavor and great by themselves. At only 3g net carbs per waffle they fit perfectly into a low carb lifestyle.

I’d like to think breakfast recipes are one of my specialites. From my super popular keto waffle that’s buttery and crispy to my coconut flour waffle for those with nut allergies. When I first started making waffles a few years back I knew they had to be free of the eggy taste I noticed in other recipes. Outside of that they had to pair well with or without a topping such as maple syrup, which lead to the creation my chocolate Oreo keto waffle, goal achieved!

How To Make Almond Flour Waffles

First, heat your waffle iron up while making the batter. Also, melt your butter and set that to the side so that it can cool.

In a bowl, mix together almond flour, sweetener, baking powder and cinnamon. In a separate bowl whisk together eggs, butter and vanilla extract.

Next, combine dry and wet ingredients.

Then, pour waffle batter into preheated iron and cook until done. You may or may not need use cooking spray on the iron. I have a non-stick waffle iron and I never worry about my waffle recipe sticking.

Lastly, remove and serve. You can enjoy these with or without toppings.

These work perfectly if you wanted to make a double batch to eat later. Freeze the extra waffles and they will keep for at least 3 months in the freezer. Remove them from the freezer and pop them right into the toaster for a crispy taste.

What Is Almond Flour

In the grocery store you’ll find several different variations of almond flour. To add, they may from brand to brand. In these almond flour waffles, I used fine blanched almond flour. But, what does that mean?

Blanched almond flour, this type of almond flour has the husk removed then ground into a fine or coarse flour. The finer the flour is ground the better the flour will perform during baking. Couple of brands I know are very good are Bob’s, Kirkland’s and Nature’s Eats finely ground.

Almond meal, you’ll fine the whole almond ground into a flour. The husk and all! This type doesn’t bake well due to the husk. Will it bake? Sure, but both the end results will be different. For example, the baked good would be a bit drier and more crumbly.

Yes, in fact according to WebMD almond flour is only 2g net carbs per cup. Meaning, in these almond flour waffles there are only 8g net carbs from the almond flour minus other ingredients. So, anyone on a low carb or keto diet will benefit greatly for choosing almond flour over traditional flour.

Can I Sub For Coconut Flour

No, this isn’t a recipe where you can do that. I do have a coconut flour waffle that is made to use coconut flour. There you’ll see the ingredients and instructions are very different that is what you’re looking for.

Yes, it is! Almond flour is a whole food source that is simply ground up into a fine powder. Nuts are included into the paleo diet. I advise with any diet be mindful of the amount of almond flour you eat because there are quite a few almond in an entire cup of almond flour. Of course, in most recipes you won’t have to eat that much but it’s something to be mindful of. However

Toppings for a almond flour waffle? 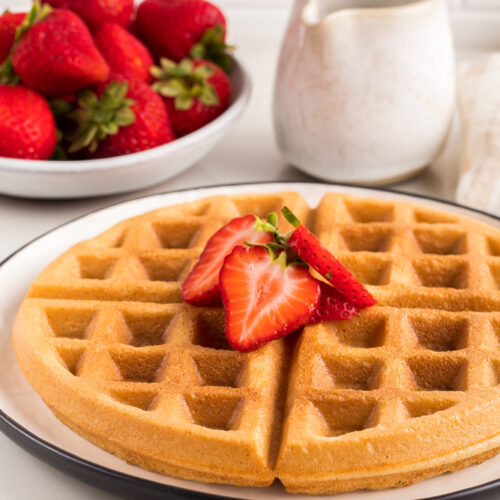 Can I Sub For Coconut Flour

No, this isn’t a recipe where you can do that. I do have a coconut flour waffle that is made to use coconut flour. There you’ll see the ingredients and instructions are very different that is what you’re looking for.