These keto cinnamon rolls were taken to the next level with sugar free maple syrup and pecans. Not to mention gluten free, keto friendly, and low carb.

After my yeast experiment was put to the test, I needed more evidence. I felt the need to try a recipe that actually contained yeast in order to get all aspects of it.

May I add, I have never cooked with yeast before. Gnom-Gnom where the idea came from so the base of the cinnamon roll is originally from there. Great website that I recommend.

I want to note that there is actual maple syrup in the recipe. There aren’t any sugars left from that due to the yeast. I proved this exact thing, and science backs this up as well. Baker’s yeast isn’t bad for us. But, for anyone with candida, yeast infection, or crohn’s disease I advise to not eat yeast. There are other health issues were it isn’t advised as well. But, not too many.

Fathead dough has been the traditional go to in keto cinnamon rolls. Personally, I’m all for it, but fathead dough is high in calories. Due to the cheese the fat content kinda up there.

Yeast helps things rise. You won’t get the same pull that gluten provides. But, you will get that airy, fluffy texture that seems familiar.

These didn’t turn out very sweet to me. Not sure if the yeast had something to do with it or what but the interior was were the sweetness was. On the inside laid your typical cinnamon roll. The cinnamon, brown sugar alternative, and sugar free maple syrup really did a number together. Oh yeah! Forgot the pecans.

Topping can be your personal choice. I’m not the biggest fan of sugar icing due to how it’s made. Using stevia or erythritol can give you a bitter or minty taste in your icing due to the large amounts. Sprinkling with powdered sugar is a option as well.

Cream cheese icing was a go to in my household. It kept that tangy flavor, with a touch of sweetness.

If you are yet to try Choczero’s syrup line you’re missing out. They had about 4 separate flavors last time I checked. Anyway, I have the caramel one lying around the house from a previous recipe. Add that caramel sauce and sit back and enjoy!

That caramel sauce added that punch of sweetness the dough lacked. Without any aftertaste, just sticky, gooey goodness.

Itching with a sweet tooth? Done the correct way these can provide more than that. The dough isn’t very sweet at all. Especially, for a newcomer that isn’t use to keto desserts. The interior of these keto cinnamon rolls is where the goodness lays. To think of it, aren’t all cinnamon rolls that way? Top with swerve, cream cheese icing, or a Choczero syrup. Done correctly these can’t disappoint. 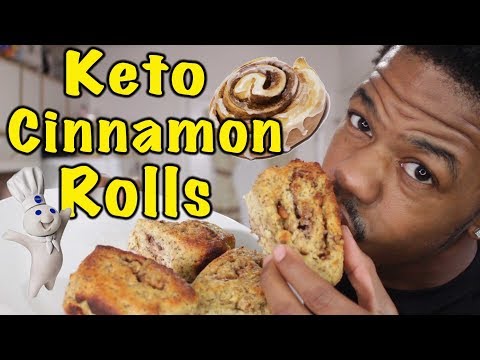