Not being your traditional low carb cinnamon rolls these are made with chocolate and peanut butter. To add being gluten free, keto friendly, and absolutely delicious!

Previously, keto cinnamon rolls were a thing here. Filled with maple, brown sugar, cinnamon, with crunchy pecans. Something to marvel at for sure. Yet, my sugar free friends today is a new day and new recipe.

The thing that lacked with me for the previous was the missing flavor. Truly, I am a believer that a healthy diet can and should be more than satisfying. There are times I am testing out a recipe and I can’t stop eating it. I know I have something special then.

In addition, I wanted to stray from typical. That will catch up with me sooner than later, but lets proceed. I wanted to cinnamon rolls to be able to be eaten without a topping. No need for a spread, something to be eaten straight from the microwave.

Chocolate is the name, but you can call me cocoa!

In order to boost the flavor of these cocoa was a easy option. Chocolate is such a strong flavor you can’t miss it. Sadly, what adding chocolate did was make the rolls a little more brittle. Meaning they didn’t hold as well in the dough form with out a strong binder. They tasted better so I didn’t complain much. This just explains the lack of strong structure in the pictures you see.

I wanted to have that sugar free Reese’s feel to the dessert. To change the flavor of a low carb cinnamon rolls I’d better do it correctly. Add the powdered sweetener to the peanut butter allowed it to harden into a paste texture like Reese’s. The result ended up staying the same even after baking.

Additionally, glaze or a topping isn’t needed. I welcome you to try a sugar free chocolate syrup. Let me know how that turns out. In the photos I used a sprinkling of the powdered sweetener. This didn’t add much flavor but sure made it look nice, am I right?

Out of the oven these smell like chocolate cake. The texture is like chocolate cake. But, the taste is a low carb dessert. Meaning they don’t produce the level of sweetness you associate with the smell and feel. That scent of Hersey’s fools you a bit. Not that they lack flavor just the mind is a powerful thing.

Low carb cinnamon rolls with a twist. Basically a low carb chocolate cake coupled with sweetened peanut butter. Out the oven prepare for chocolate bliss as the aroma of Hersey’s fills your kitchen. Biting your finger nails as you wait for this keto friendly dessert to finally cool so you can dive in! 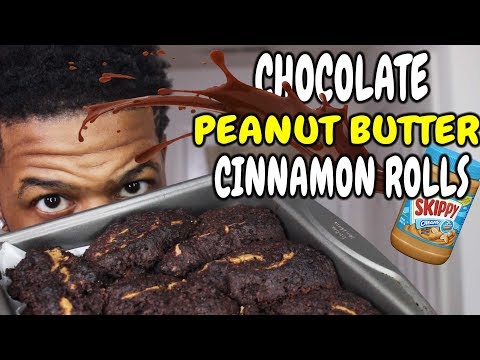 *maple syrup will be eaten by the organisms in the yeast. So no sugar will remain from the syrup
Tried this recipe?Leave a rating and comment, thank you