Snickerdoodle flavor is one of the most popular cookies. But, add a little cream cheese to make a keto snickerdoodle cheesecake and now you have an amazing dessert at only 3g net carbs!

It’s fall season and you need some cinnamon in your life! Not everyone enjoys pumpkin spice but who am I too judge. Thanksgiving recipes are filled with cinnamon from the sweet potato casserole and so on.

People find it fun to try different variations of their favorite things hence why keto snickerdoodle cheesecake was born. You can find the classic snickerdoodle cookies year round proving how popular they are. So, making a keto cheesecake flavor was only right and after you taste it you’ll fall in love. Get the pun?

How To Make A Keto Snickerdoodle Cheesecake

Something that is crucial when baking a cheesecake is to have your ingredients at room temperature. So, take them out of the fridge a few hours before you’re ready to start baking.

First, you have to make the crust. Mix the blanched almond flour, cinnamon and melted butter together. Press the cheesecake crust down into the spring-form pan evenly. Bake for 10-15 minutes until golden brown. Remove, then allow it to cool while you mix together the cheesecake filling.

In a mixing bowl, cream together the cream cheese and sour cream. Next add in the granulated sweetener and cinnamon. Then, add in the vanilla. Lastly, you want to add in your eggs one at a time. This is important to add one at a time and not all four at once.

Now, pour the cheesecake filing over the cooled cheesecake crust. Give the cheesecake a tap on the counter about three times to allow air bubbles to rise to the top. Before placing in the oven mix together cinnamon, sweetener and nutmeg to sprinkle across the top of the cheesecake.

Once the hour is reached remove the cheesecake and allow it to cool completely on top of a cooling rack.

Then, place the cheesecake in the refrigerator for at least 4 hours or overnight to allow the cheesecake to fully set. This is the most crucial part that so many people think they can skip.

Now, once the cheesecake is set, serve and enjoy!

You always need to store a cheesecake in the refrigerator. Another thing that makes it great is it freezes extremely well. Remember, whether it’s frozen or in the fridge be sure to have it in an air tight container. I like to make my cheesecakes then vacuum seal them. I remove a slice at a time to eat.

Do I need to use a water bath?

This is such a common question! For this recipe, you don’t have to if you don’t care about possibly getting a crack in your cheesecake. However, if you want to avoid a crack the water bath is the best and most gentle way of baking a cheesecake. Here is a great article on how to do a water bath. And yes, I did use a water bath for the keto snickerdoodle cheesecake in the photos.

Can you eat cheesecake on keto?

Good fall recipes to make on the keto diet? 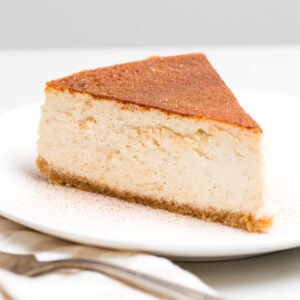