A touch of home with a keto pumpkin pie just as you’d get when you were young. The flavors of pumpkin and spices are perfect for Thanksgiving and the holidays. Yet, only 6g net carbs and sugar-free!

What would Thanksgiving desserts be without pumpkin pie? In the south it’s paired or exchanged for sweet potato but we don’t eat sweet potato on keto. Imagine looking forward to this dessert each holiday and holding your head down because you have to eat sugar in order to enjoy it. Thanks to keto and sweeteners like stevia, allulose and monk fruit that doesn’t have to be your holiday!

Pumpkin season is the best time of the year, not up for discussion. Although red velvet is at the top of my list I enjoy pumpkin a bit more because the companies get behind it more meaning more options. I am lucky enough to make my own desserts so being keto I never feel a fear of missing out (fomo) now neither do you. This keto pumpkin pie is easy to make. Honestly, the hardest part would be making the almond flour pie crust simply do to taking the time to make it.

How To Make A Keto Pumpkin Pie

First, you have to make the crust. If going crustless proceed to the next step. You can also make this recipe into pumpkin pie bars. You can use the 8×8 pan almond flour crust I use for my cheesecake bites instead.

Next, I added the addition of brown butter. If you’ve never made brown butter there is a video with my keto caramel sauce showing how it’s done. To add, you do have the option to skip it and the pie will bake the same. The butter is simply there to add to the nuttiness of the dessert.

Now, in a mixing bowl add pumpkin, heavy cream, butter, sweetener, all the pumpkin spice seasonings and lastly the eggs. Mix until smooth and even. Pour into pie crust then cover with aluminum foil. This protects the crust.

Bake for 40 minutes covered then uncover and bake a remaining 30minutes until pie sets properly. When cooled completely refrigerate for at least two hours. Remove, then serve.

This keto pie should be stored in the fridge when not being served. You can also freeze the pie for later I an airtight storage container or my favorite which is vacuum sealing.

Does pumpkin pie have a lot of carbs?

Yes, there is a ton of sugar in the pie filling in itself then you have to consider the flaky crust. There is flour used to make the pie crust adding to the overall net carb count. Making a crustless pie would lower the carbohydrates but not eliminate the sugar from the filling.

related: how to eat pumpkin on keto

Is there squash in keto pumpkin pie?

Pumpkin is a squash itself. It works great on keto because there aren’t many carbs in pumpkin compared to other squash varieties.

How to tell if pie is done?

Pumpkin pie is a custard style pie. An easy way to know is the look honestly. You never want your pie to look as if you just poured the filling in. You should notice browning around the edges of the crust. Also there could be a slight jiggle to the pie but the filling shouldn’t move the same way as it did when you poured it. Another key is the filling should look someone set. Note, it isn’t until it is refrigerated. 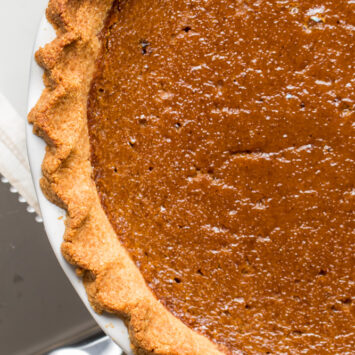