Keto jalapeno poppers that are low carb, loaded with seasoned cream cheese and chives with a massive amount of bacon in each bite. This is a perfect appetizer or quit snack during a party or game day that’s full of flavor and only 2g net carbs each!

One of the things you can continue to enjoy on keto are peppers. Most are just fine. Even the little sweet peppers can fit into the keto diet in moderation. According to the USDA, an entire cup of jalapeño are only 3g net carbs. That means you are beyond safe because I don’t know anyone that will sit down and eat a cup of raw jalapeños.

Are There Carbs In Jalapeno Poppers

So, yes and no. Some recipes require breading for a crispiness and bulking. This can be a huge problem because that makes the carbs super high for one little popper. In this recipe, you don’t have to worry because everything about these are made just for you!

That’s it! Simple ingredients put together for maximum flavor.

How To Make Keto Jalapeno Poppers

To start, split and remove the seeds and insides from each jalapeño. Place them to the sides for later. Also, before starting bake or fry up the bacon pieces. After they’re done I recommend you chop them up finer with a knife so they can fit nicely.

Next, in a bowl add in room temperature cream cheese. Then, on top add in salt, black pepper and garlic powder.

Now, chop chives up and shred cheese from a block. If you get pre-shredded cheese it can work but the cheese doesn’t melt as well. Next, toss in chives and shredded cheese and fold it in.

Grab your sliced jalapeño peppers and stuff each with the cream cheese mix. Leave a little room at the top for the the bacon. Sprinkle the bacon across your keto jalapeno poppers.

Lastly, bake for 20 minutes in a preheated oven. Allow them to cool a bit when you remove them because the insides are pipping hot.

If you feel like you’re going to have some left I suggest freezing the cream cheese and use a fresh jalapeno when you’re ready to make them again. Of course, you can always reheat them but store in a container where it doesn’t smash the poppers so bad. 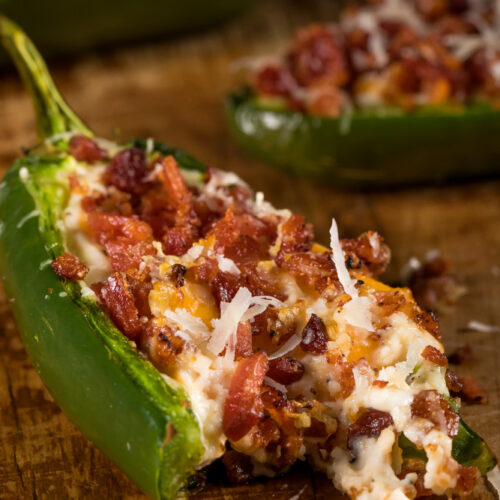 Keto jalapeno poppers that are low carb, loaded with seasoned cream cheese and chives with a massive amount of bacon in each bite. This is a perfect appetizer or quit snack during a party or game day that's full of flavor and only 2g net carbs each!
5 from 1 vote
Print Recipe Pin Recipe
Prep Time 20 mins
Cook Time 20 mins
Total Time 40 mins
Course Appetizer
Cuisine American
Servings 10 poppers
Calories 110.4 kcal