Keto french toast is a recipe most think can’t be done. Replacing french toast for a low carb breakfast can still be easy and delicious. But now I make them something you can dip!

Preparing for my 100th video on YouTube I created a giveaway. In response to my poll, keto french toast won the giveaway.

At first I was worried. How do I pull this off?

So I went in search of a keto bread that could do the job. Queen keto had my solution which is what brings us here today.

Now, I make bomb french toast with sugar. But, sugar free recipes only here so I adapted what I had learned throughout the years. Really, I just needed the bread!

Some of my favorite french toast sticks growing up were the ones in Walmart. The sticks had a covering of cinnamon and sugar on them. Delicious! Just thinking about it I can smell the warm dough heating up with the spice smell of cinnamon. Not to mention the caramelization of the sugar.

The results on the french toast produced a lovely smell and texture feel in the mouth. I even pulled the bread out of the refrigerator! After cooking the bread kept its structure yet remaining soft enough to cut with your fork.

I was so happy to do this recipe after tasting it. I couldn’t believe that the taste was so similar to the breakfast I remembered. Except the recipe is keto friendly. Man I love this lifestyle!

These keto french toast aren’t as sweet as you’re use to. They give you the french toast aroma, mouth feel and visuals. The sweetness and cinnamon give you a great flavor. I have never had a keto egg loaf but I over hear that’s what people are using these days. Wait until they see these!

Macros can be found on post featuring the bread here 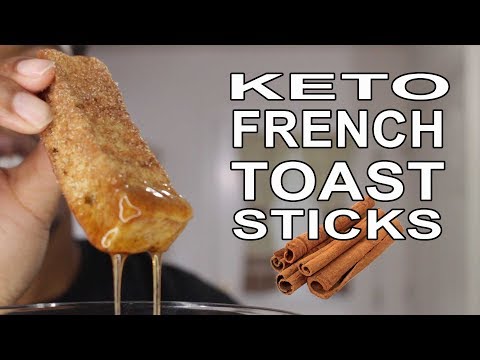 Keto french toast is a recipe most think can't be done. Replacing french toast for a low carb breakfast can still be easy and delicious. But now I make them something you can dip!
No ratings yet
Print Recipe Pin Recipe
Prep Time 15 mins
Cook Time 10 mins
Total Time 25 mins
Servings 3 people