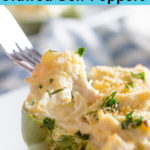 This creamy chicken keto stuffed peppers recipe is quick and easy. It’s not only low carb but keto friendly with a high fat delicious cream sauce.

Stuffed peppers are delicious in addition to being healthy. Depending on the pepper you choose they leave their wonderful flavor behind.

So, not only are you getting the flavor, you are getting the bell pepper in your meal as well. Think taco shells except low carb and healthier. You cook your meat in the keto stuffed pepper then you can eat it!

What’s the difference between bell peppers?

Did you guys know all the bell peppers start off green?

This reflects in the price as well. The green are the ones picked before harvesting. Bell peppers then turn yellow, orange, then red.

Personal preference! I love the bell pepper as a sort of edible bowl with my meal. Yet, to keep it closer to zero carb you can just enjoy your stuffing over the bell pepper.

What can I put in stuffed peppers?

Keto stuffed peppers are so versatile. I have seen buffalo chicken, Philly cheese steak, taco style, the list can go on and on.

In return making this such an easy keto recipe. Find a meat and top with fat! Cheese is great and I even topped with parmesan here.

To add, the entire chicken breast is an option as well. I shredded the chicken making the cream sauce separate.

How to make shredded chicken?

All I did was season a pot of water with salt and boil the chicken tenders for 20 minutes. It was that simple. Draining the chicken when it was done then allowing it to cool.

That step was optional but then I shredded the chicken with two forks tearing in opposite directions.

Next, I split the bell peppers. Cutting them in half and removing the stem and seeds. You can do this from the top as well. To this you simply cut around them stem at the top.

After these were prepped and ready I begin to make my cream sauce.

The cream sauce consisted of heavy cream, sour cream, mozzarella cheese, salt, onion powder and cayenne. This isn’t the traditional creamy chicken. I kept things minimal for flavor. I see others toss all these different seasoning and spices in their meals washing the taste of one out with another.

In the case of this dish, less is more.

Baking at 350ºF for 15-20 minutes looking for the bell peppers to get a bit weary looking. Allowing them to cool then serve. 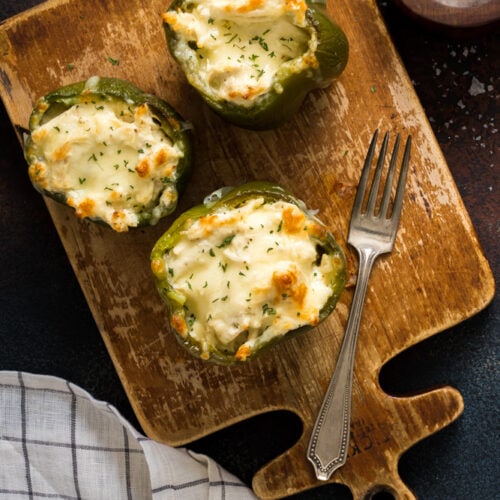