Skip to content
This loaded keto potato dip is perfect for those missing the flavor of a baked potato. Featuring ranch dressing, sour cream, bacon and cheese making this perfect for your keto diet! Would you believe there are no potatoes in this? Well not after you taste it! You see I like many people after starting the keto diet missed potatoes. Potatoes are a no go for keto but we will discuss that in due time. The essence of the potato had to be captured through the toppings. Not to mention the white pepper added into the recipe. Why white pepper? In the past, my grandmother would always add white pepper into her potatoes she made. This in turn associated that flavor with potatoes. I had no idea what white pepper was at one point. Until a recipe I reviewed called for it. Immediately my taste buds said potato. And I knew I had a gem into unlocking that flavor.

Why this loaded keto potato dip is perfect!

How to make a keto dip:

So it’s super simple! First, allow your cream cheese to come to room temperature. Why fight the cheese? During this time chop up your chives. I couldn’t find chives pre-chopped, maybe you will be lucky. The bacon is up to you. I used real bacon bits out of a bag. No artificial bacon for us. You want the real thing. If you’d like you are welcome to cook your own. That fresh bacon sounds tasty! However this is an easy keto dip that will be a extra step in the process. Now that you have your cream cheese at room temperature. Your chives chopped and bacon ready. You can start making the dip. Cream together the sour cream and cream cheese. Afterward, add in all your seasonings skipping the bacon, chives and shredded cheese. After you mix those fold in your bacon, chives and cheese. I wouldn’t whisk this in. Folding is better, otherwise it will get stuck if you are using a mixer or whisk. By the way be sure to grab some flax crackers. Maybe some Whisps cheese crackers because they are bomb.com with this dip!

Can you eat potatoes on the keto diet?

I hate to be the bearer of bad news but no. Now, there are ways to make a really small one fit your macros. But, I don’t think it will be large enough to really satisfy your appetite.

What vegetable can be used instead of potatoes?

This is a great question because on the keto diet we have options. Radishes! Yes, weird I know but they are the closest in flavor. Never did I say they tasted the same don’t let anyone fool you. But red potatoes and radishes cooked and prepared can have a very similar flavor. I actually have a wonderful radish recipe that was passed down to me. Totally free when you sign up for the newsletter to the site. 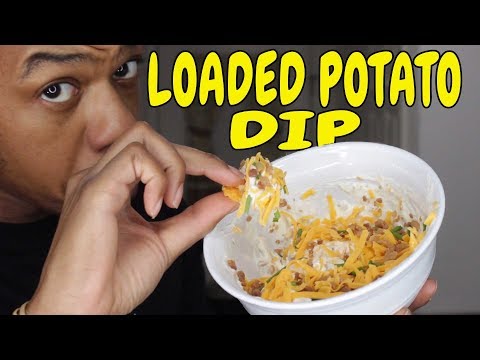 For your crackers I highly recommend Whisp cheese crackers. They go so well with the loaded keto potato dip plus they are the ones I used in the video.
Tried this recipe?Leave a rating and comment, thank you