Keto chocolate cake taken another level with the addition of toasted coconut. Keto german chocolate cake is sugar-free and gluten-free as well. Taste for taste an ultimate copycat recipe!

Of my favorite three cakes german chocolate is one. So this one was near and dear to me to get correct. Everything had to be just perfect for my approval. And I hit every mark!

The toasted coconut topping was my biggest worry. Would I be able to get it sweet enough. Although I did miss the mark for an extreme sweetness I feel that was best.

The sweeter things are the more neutral you become to the more subtle ones. Yet, we won’t talk about sugars effect on this post.

How to make keto chocolate cake

In order to make this german chocolate cake you need a few ingredients. Cocoa/cacao butter and melted chocolate. Preferably 100% chocolate would be the best. What this does is add the missing fat back into the chocolate enhancing the overall flavor.

Almond flour and coconut flour are then mixed. This is the ultimate combination along with sweetener for texture. The crumb is not too tight and extremely moist. Not so moist there is no texture where it melts in your mouth. This isn’t as pleasant as it sound as in dealing with chocolate. 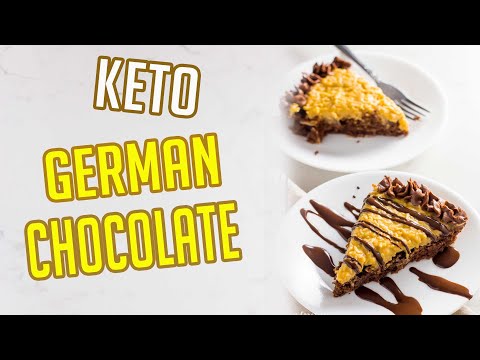 You then add in your granulated sweetener. I use plain erythritol and Lakanto’s which is a monk fruit and erythritol mix. Add in salt and baking soda. Give the flours a good mix and proceed to wet ingredients.

Remember the chocolate and cocoa butter mentioned earlier? Well those were melted along with butter so they should be cooled now. I personally like to mix my chocolate in last from my other wet ingredients. Mix heavy cream, three eggs, liquid stevia and lemon juice or apple cider vinegar. The acidity in lemon juice or the apple cider vinegar will give the baking soda what it needs for the rise in the cake.

Place in a 9 inch greased baking dish at 300ºF for 25-35 minutes. Low and slow is the path with gluten-free flours.

When making the creamy, sweet topping that’s traditionally brown sugar and milk I felt would be challenging. It’s amazing what can be done with heavy cream, sweetener and blackstrap molasses.

Yes, you read that correctly. Molasses is 13g per tablespoon. For the entire top I only use half. Not to mention its blackstrap which has a host of benefits that come with it. Even so with such a small amount you won’t get but so many of the nutritional benefits as well.

It requires you to heat it to melt the eggs in the custard. If you taste it while still warm it will appear very sweet. Don’t be alarmed because sweetness is heightened with heat. As it cools the sweetness will lower as well as the combining the custard with the keto chocolate cake. Once you place the two together at a cool temperature the sweetness of the custard isn’t very noticeable. Yet all the flavor will be there that you recognize.

How to toast coconut:

Toasting coconut is traditional for a keto german chocolate cake. I didn’t in the pictures clearly but if you want the extra flavor I definitely say go for it! It will add to cook time but I say it’s worth it in the end for authenticity.

In a sheet pan spread the coconut out in a very thin even layer. Some will overlap you can’t help that. On a low heat such as 250-300 F, 250 I would say would be better toast the coconut. About every 10 to 15 minutes give the coconut a stir around in the pan until you start to see browning. Now browning is very important because once it browns it will burn quickly. Once you see browning check every 3-5 minutes until you have your desired golden look.

The idea of the low and slow cook is similar to onions. You want to give the natural sugars a chance to caramelize.

In a sheet pan spread the coconut out in a very thin even layer. Some will overlap you can't help that. On a low heat such as 250-300 F, 250 I would say would be better toast the coconut. About every 10 to 15 minutes give the coconut a stir around in the pan until you start to see browning. Now browning is very important because once it browns it will burn quickly. Once you see browning check every 3-5 minutes until you have your desired golden look.
Tried this recipe?Leave a rating and comment, thank you