Having southern style keto banana pudding is an option when following a low carb, sugar free diet. To add, what if I told you I had vanilla wafers in every bite? That’s exactly what you get in this simple and easy dessert recipe that will carb all your cravings of bananas!

On keto, bananas are not apart of the food list. But, you can still use things such as extracts to achieve that banana flavor. And to be honest the flavoring is what we know best from coming from a life of processed foods.

How To Make Keto Banana Pudding

This isn’t an instant pudding recipe, you do have to add some heat to it. That doesn’t mean it’s difficult at all. I break it down to make the keto banana pudding recipe as easy as possible. Finish it off with whipped eggs whites for a more authentic feel or a keto whipped cream to keep it simple! You don’t have to buy keto cookies you can make vanilla wafers at home and crumble them yourself.

How To Make Instructions

To start, you want to bloom the gelatin. This will allow the keto banana pudding to have a thicker texture and remain creamy. In 1/4 cup of heavy cream, pour gelatin powder in and give it a slight mix. Just one or two circles is enough. Then, set it to the side and let it do its thing.

Next, in a saucepan add heavy cream on medium/low heat. Then, add in banana extract and your keto sweetener. Because you are heating it, it doesn’t matter if you have powdered or granulated on hand. Now, do not allow the heavy cream to boil. It can steam but if you see one bubble quickly pull it from the heat. This recipe takes less than 5 minutes on the stove top.

The next step you want to grab that bloomed gelatin and add it into the heated heavy cream. You can remove it from the heat if it’s steaming. That will tell you it is hot enough to allow the gelatin to melt down. The heat is simple for the gelatin and the sweetener.

Lastly, once everything is smooth, pour the keto pudding into a bowl. If you have a strainer now would be a great time to use it to catch any of the gelatin that wanted to be stubborn.

What Puddings Can You Eat On Keto

There are sugar free puddings sold in the store but they are sweetened with Maltitol. If you don’t know what that is in short you’re better off eating the sugar version. If you’re familiar with the glycemic index which is a chart that gives you a value of how a particular food effects your blood glucose levels. Maltitol is higher than sugar which will kick your booty out of ketosis in a heart beat. Especially if just starting out.

No! In one medium size banana per the USDA is 24g net carbs. Now, if you wanted to use a banana to spread out in the recipe you could but I’d be against it. Bananas are a good source of potassium but there are far better options such as grass fed beef. For what you’d be looking for in that bursting of banana flavor a itty bitty piece of banana will only leave you looking for more sugar. 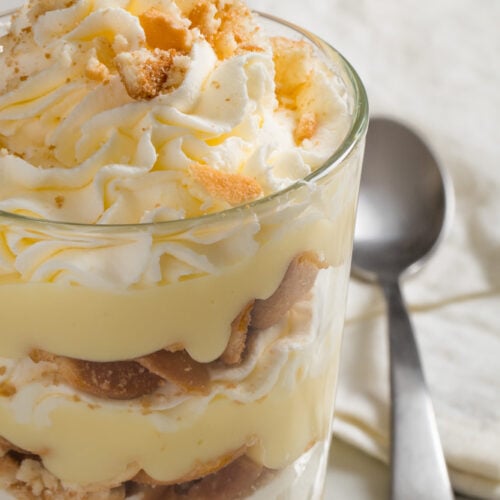 Having southern style keto banana pudding is an option when following a low carb, sugar free diet. To add, what if I told you I had vanilla wafers in every bite? That's exactly what you get in this simple and easy dessert recipe that will carb all your cravings of bananas!
No ratings yet
Print Recipe Pin Recipe
Prep Time 10 mins
Cook Time 10 mins
Refrigeration 1 hr
Total Time 20 mins
Course Dessert
Cuisine American
Servings 6 servings
Calories 271 kcal